How To Become A Published Author & Keep 100% Of Your Profits

A few years ago, my 93-year-old mother fell. Desperately trying to keep her out of a nursing home, I advertised on Craig’s List for two caregivers who could live in and take care of her full-time.

Victoria and I  arranged to meet in person in the parking lot of an abandon Sears store in east St. Paul. She was a short, lively Jamaican woman in her 60s. I immediately liked her, and yet, the truth was, I was taking a huge risk if I invited this stranger into my mom’s house. What if she turned out to be a thief, or incompetent, or worse? But I had little choice, as the rehab facility was about to release Mom or start charging us $500 a day.

That story, fortunately, ends well. Victoria moved in and oversaw Mom’s care until the day she died. She was the best caregiver I could have asked for, aside from Terry, who moved in at the same time. Victoria and Terry soon became a well-oiled machine, and I could count on them to be there for Mom no matter what.

Each morning after her night shift, Victoria loaded up her rolling suitcase and several over-the-shoulder bags, put her little dog Jack into his kennel and walked six blocks to the bus stop. From there she spent almost three hours a day, each way, getting to her massage therapy office on the other side of the city. Her dependability and perseverance were impressive.

One day, while biking on the parkway near Mom’s house, I ran into her walking Jack. I told her I felt for her: having to ride the bus for three hours each way seemed like torture to me.

Rigorously disagreeing, Victoria shared some of her childhood memories. She grew up in poverty in the Caribbean, and every day she had to walk to school with no shoes. Imagine summer in Jamaica—the sweltering heat, the sizzling roads—barefoot! She said those trips began the inspiration to make a better life for herself, one in which she had shoes! She even had a name for the book she was planning to write about pulling herself up and out of poverty and making her way to America: Shoe Dreams.

I had an idea on how to make her long hours on the bus a learning experience. I gave her a copy of Guerrilla Publishing to read on the commute. She was very grateful, and we both guffawed at the “coincidence.”

Victoria took the book and ran. She delivered her first manuscript nine months later, and had a friend do an original drawing for the front. Within a year of the time we met on the parkway, she created Shoe Dreams Publishing and we had a book. Together we traveled to Jamaica where she took me in-country to find her old neighborhood. Many of her childhood friends were still there. It was a miracle for her to see this lifelong dream of being an author come true, in so many ways. 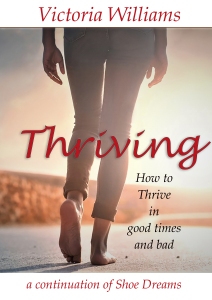 Since then, she has published her second book, Thriving: How to Thrive in Good Times and Bad. On top of that, she organized Terry to write her autobiography, Mama Used To Say, the story of growing up in the projects of Southside Chicago.

These completely serendipitous events changed all our lives. I know my mother lived longer because of those two. And they were given a place to thrive in her home and in her heart. Mom called them her sisters.

The day before Mom died, Victoria was there, as always, making sure she was comfortable. At one point, when Mom could hardly speak, she looked up into Victoria’s eyes and whispered, “We had a good life.” Yes, we all did.

Last year, Victoria and I spent a week at the London Book Fair. We were happy to learn that the Guerrilla Publishing system, with its worldwide distribution and complete control of financial, editorial, and promotional decisions, is still ahead of its time. We learned about publishing rights and how to maximize those rights to create passive income for our books that are already on the market. It was an exciting trip.

The remarkable story of the last years of my mom’s life is one I plan to write and publish someday. Meanwhile, with Shoe Dreams Publishing about to release Victoria’s third book, Between Two Continents, she has already made some of her wildest dreams come true—that of being a published author who keeps 100% of her profits.

How about you? Do you have a book in you that needs to get out? I can help. Suffice it to say, you are never too old to become a published author. Just ask Victoria! Then call me. I’ll help you figure it out.